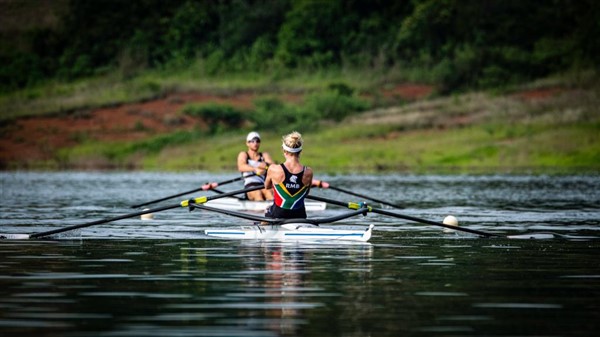 The Rand Merchant Bank (RMB) National Rowing Squad attended their first training camp of the season at the idyllic Tzaneen Dam this past week. The rowing season runs from October to September each year.

According to Grant Dodds, the technical performance manager of the team, they love training in Tzaneen and plan to be back in August next year before competing at the World Championships in the Czech Republic.

The national squad has become a regular sight over the past few years as they travel to Tzaneen annually to take advantage of the idyllic conditions ahead of their major competitions. The teams have not been here in the last two years due to the low water levels and the advent of the Covid-19 pandemic in 2020.

“We are looking forward to setting a strong foundation for our season ahead under the watchful eye of our national head coach, Tiago Loureiro. Training on the serene waters of Tzaneen dam is ideal to lay this foundation,” said Dodds.

The team and its management are thankful to their sponsors, RMB, for making this training camp possible. Hotel @Tzaneen welcomed and hosted them. Local fishermen and watercraft owners know how difficult it is to get access to the dam, especially from the Jetty 3 entrance.

The Tzaneen Municipality however provided the SA squad access to the dam and Jetty 3 to launch. Dodds said thanks to the municipality they could access the dam without any problems.

Dodds also gave their gratitude to Etienne van Wyngaardt and his team for hosting them at Health and Fitness Tzaneen Gym. “Freda Dry also assisted us with physiotherapy during our training camp, so you can see, it was a full town involvement.”

“We have assembled a young team of senior and u/23 athletes as we start our campaign to Paris 2024. We only had two returning Olympic athletes, Kirsten Macdonald and Sandro Torrente, with us at this camp and expect to have more of them returning to the team in January.”

The team’s goal during this training camp was to complete a large volume of training. The rowers covered about 20km per session and trained up to three times per day.

The team’s selections will be concluded in May 2022 and they are currently preparing for two events, namely the RMB National Sprint Championships at Victoria Lake Club in Germiston at the end of January, and the RMB Buffalo Regatta in East London in mid-February.

Can you lead the Wolfpack?