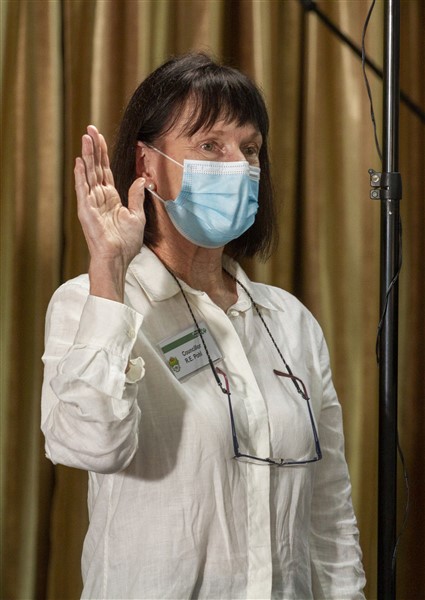 The composition of the new council of the Greater Tzaneen Municipality (GTM) which was inaugurated on Monday, was not be complete until one member from the DA was finally sworn in on Wednesday. Long-serving member of the official opposition, René Pohl, will now represent the DA on the Executive Committee of the GTM.

Pohl was named the DA’s candidate for the EXCO seat after the inauguration on Monday, which is why she was only sworn in by the presiding magistrate two days later. She will also serve as the ward councillor for Ward 14 after the DA successfully defended their position in the recent local elections. Another ward, Ward 15, remained under the DA’s control when councillor Chrizelle Dreyer won by a significant margin during the 1st of November’s polls.

The time wasters, the Economic Freedom Fighters, received a stern lashing by the new Speaker Sanie Tiba who reprimanded the group for holding up proceedings with their antics. A protest by the red overall wearers cost council 20 minutes in wasted time as the group demanded their own tables and chairs for the meeting.

Tiba said that their walking out during the proceedings would not stop the council from proceeding and warned that if they repeated the act, the meeting would continue without them. She also called on the acting municipal manager to work hand-in-hand with the district municipality to speed up service delivery and report back to council thereafter.

The district (Mopani) inauguration ceremony will be held today at the Kariba Lodge. We have been informed that thankfully the former mayor and then speaker of the GTM was moved to the Mopani District. We will have a report on this ceremony in the next edition.

Results will not be published

Ten years on and growing ever faster