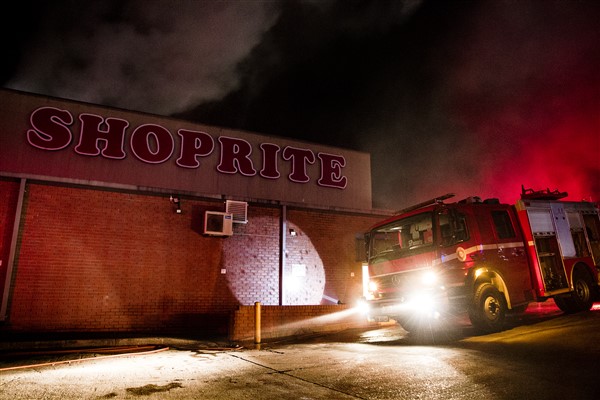 At around 18:00 on Tuesday evening reports started circulating that Shoprite in Tzaneen was on fire. The fire brigade was dispatched to the Tzaneen Crossings centre and soon the reported fire was brought under control – the more apt description however would be “prevented from starting”.

Whilst there was a small fire that caused a large column of smoke to bellow up from the rooftop of the Crossings Centre, the fire was extinguished by the centre’s operations manager, Eben Fichardt, using a fire extinguisher when the first sign of smoke was detected. In fact, the fire was out by the time the fire brigade arrived. As per usual, the Tzaneen Neighbourhood Watch, arrived in force to lend a hand where they could, and Northern Security kept a close eye on the scene from the parking lot.

“The fire had somehow started in a small section of the Shoprite store’s receiving bay and before it could spread to the rest of the store, Fichardt had extinguished it. Some of the stock kept in this particular section of the storeroom, had started smouldering causing a lot of smoke which, without ventilation, had only one way to go which was up and out of the vent to the rooftop,” explained Alida Smit, General Manager of the Crossings Centre. “As a precautionary measure we contacted the fire brigade.

Most of the damage to the storeroom is from the water and not flames. The fire detection system only activates once the flames reach the sprinkler system and sets it off. Because the fire was not big enough, and the heat not intense enough, this system did not activate. It is indicative of how small the fire was when it was extinguished.”

The stock stored in this room was Marie Biscuits and corn flakes cereal which started smouldering and caused the smoke making it appear as though the entire building was engulfed in flames.

Bulletin was at the scene and it was clear that there was no danger of the situation escalating. The fire department opened the doors to the storeroom to allow for ventilation in order for most of the smoke to clear so that they could enter and ensure that there was no chance of a fire reigniting.

At the time of going to print the exact cause of the fire had not been determined. Shoprite reopened for business the following day, albeit a little later than usual. No staff members or patrons were injured during the incident.

Follow us on Facebook at Far North Bulletin to watch the rerun of the live coverage of the fire.